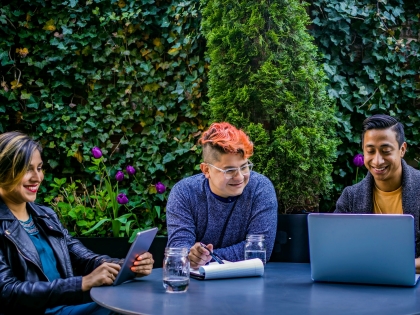 I want to delve more deeply into the concept of cognitive diversity and specifically how a Whole Emergenetics team (WEteam) could have solved one of the many challenges that Goldman’s teams faced.

Let’s revisit one of their exercises—teams were given a list of 8 businesses, a circuit board, 8 wires, and thermo-reactive paper in a tool kit. Their goal was simply to find the next location that continued the hunt.

The concept of cognitive diversity and accentuating team strengths could play a big role in overcoming this seemingly vague challenge. Let’s take a look at how different parts of the brain would see this puzzle:

Conceptual thinkers would see that the multi-node circuit board connections exactly matched a map of the subway stations of Lower Manhattan. Bingo…corresponding maps and a plan! But, what’s next? With only 8 wires, you needed to find out which circuits to connect to the more than 15 options.

Structural thinkers got down to the details—the Structural brain saw 8 businesses and 8 wires and a map. So they plotted the 8 businesses on the map of Lower Manhattan to see which were located near the subway stations.

At this point, a WEteam would be halfway there. It was apparent which 8 circuits should be connected with the 8 wires. And, teams would know the 8 possible locations where the next clue would be.

But out of the 8 different locations, how do we know which one has the next clue?

Here’s where logic and data carry the day and where Analytical thinkers could shine. The Analytical part of the brain would know that wires and electricity generate heat and that they possessed thermal-reactive paper. Scientific experimentation would show that after connecting the wires to the 8 correct circuits, heat would be emitted at one of the circuits.

So, simply lay the thermal-reactive paper on the circuit board and see where the paper reacted. Since each of the 8 circuits matched up to actual locations in New York City, the circuit that emitted heat and marked the thermal paper was the location of the next clue.

Where do the Social thinkers come into play, you ask? These were the people responsible for understanding other member’s thoughts and feelings and for creating a unified team amongst the ten members. These were teams full of people accustomed to being in the lead—relating Socially and thinking about issues from that perspective was key in creating harmony.

Additionally, behaviors—Expressiveness, Assertiveness and Flexibility—would be significant in ensuring that these thinking perspectives were coming to the forefront.

Think about how those on the quiet end of the Expressiveness spectrum would voice their thoughts. Or, those in the more peacekeeping side of the Assertiveness spectrum. These are valuable team members who needed a forum to contribute—the most successful teams would know that and ensure that collaborative atmosphere was present.

You can see that in order to solve the most difficult and comprehensive problems, you need each part of the brain at work. Fostering teams that collaborate and build on one another’s ideas is central to building cognitive diversity that anchors Emergenetics.