Reflections on the Emergenetics Profile 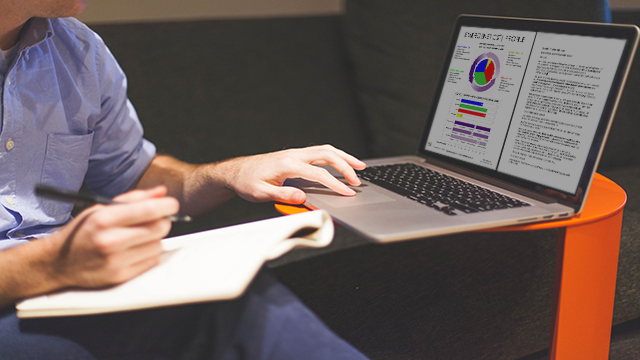 I was sitting in my undergrad fiction workshop when my professor said “How many of you edit while you write?” I raised my hand nervously with roughly half the class. I had always been reprimanded for that habit, but my professor raised her hand with us. “We’re called the Stern Editors. There are generally two types of writers: the Stern Editor and the Free Spirit.”

I thought on it for a moment and when she called for the Free Spirits, I raised my hand again.

About six months ago, I took my Emergenetics Profile and found out I was a Green-Yellow 111. As I read the report, every word felt familiar. I had always been creative—writing, animating, and crafting were my favorite pastimes—but I also struggled to trust that side.

The little voice in my head always yelled at the “dumb ideas” I would come up with. Whenever something would slip through the negativity, I would tweak for months, always wanting my projects to come out perfectly. The narrative report calls this process an “internal tennis match”, which was scarily accurate to my thought process.

Sometimes it was positive; I came up with innovations and created some brilliant plans. I was the kid that figured out how to force water to run upwards using a Styrofoam Chick-fil-A cup, a rubber band, and a straw. One morning after watching a Nickelodeon special about Post-it note animation, I opened up Microsoft PowerPoint and moved a ball across 200 slides, each going the optimal speed I calculated (.08 seconds per slide) until it looked like one smooth movement. 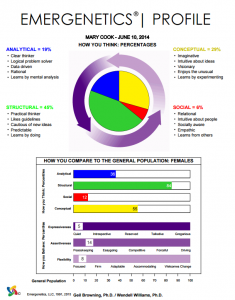 Other days the fight was not so good. I would write a story only to delete the whole thing, worried it was “weird”. I spent hours drawing a character only deciding it was useless and scribbling over the whole thing out of frustration. The Stern Editor, my Structural thinking preference, didn’t always like what my Free Spirit, the Conceptual thinking preference, came up with. I went through slumps in creating, sometimes months, sometimes years.

I had already decided I wanted to focus on writing when I learned about my preferences. I had written some books and tried to suppress my Stern Editor. That side scared me; if I was going to be creative, I didn’t know how to deal with a voice telling me I made mistakes. As a result a character got an unexplained case of Salmonella halfway through a story.

After I took my Emergenetics Profile I started thinking about my successes and my failures. It may be a shock to my self-confidence, but doesn’t being able to think logically give me an advantage? Within the month, I rewrote my book and Salmonella was no more.

As hard a combination Green-Yellow can be (only 2% of people have this Profile), it can create some great stuff. Once I knew what my brain was doing, I was able to control the two voices. I knew to let my Free Spirt roam the strangest avenues, trusting my Stern Editor to look back and judge if an idea really made sense. Creating is now a very long process, my Editor questions every choice I make, dissects every sentence I write, but it is a pretty solid one.

A Junior at the University of North Texas, Mary is an English major concentrating in Creative Writing and minoring in Political Science and Technical Writing. As an aspiring writer she spends her spare time working on creative writing projects, ranging from short stories to novels in many different genres, and on graphic design.